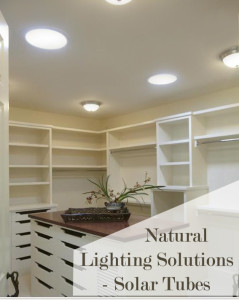 Have you ever heard of a deck prism? It is the coolest thing ever, at least it was the coolest thing ever a couple centuries ago.  A deck prism is made from glass and is shaped like an upside down pyramid.  It weighs about 15 lbs and was installed in the decks of ships to gather light and reflect it to the deck below so sailors did not have to use lanterns when transporting flammable cargo.  There’s your history lesson for the day….

Well, just think of solar tubes as the 21st century’s analogous answer to a deck prism.  Our friends just had two installed in their home, one in each of their bathrooms.  It is amazing the natural light that comes from these planetary wonders.  My friend said after their solar tube was installed she would always walk down the hall to turn off the light in the bathroom.  Light wasn’t on!  They love it!

I have a closet in our en suite that gets no light at all.  A solar tube is definitely on my list of things I want really bad!  We also have a bathroom that has only one teeny tiny window and would really benefit from a solar tube.  It is at the end of a hallway and would really brighten the entire hall.  Wait a minute!  Let’s put one in the hall.

The idea of natural light beaming down in my shower sounds fabulous.  Look at this bright space!